I’ve been thinking a lot about what I really really want lately. And no, it’s not just because of the Spice Girls song. Although I’m totally singing that in my head now…

Anywho…back to the point of this post….I’ve suppressed thoughts about what I want for a long time. Why? Without being a cry baby, it’s been a money thing. For the past dozen years or so, I’ve become acutely aware of just how broke I’ve been. I moved out early from home to avoid a toxic situation, and promptly began the process of being in over my head with debt.  I took out loans to live and never really recovered from that living on debt scenario. To date I’m facing a debt number higher than I ever expected, and all I can think is “I wish I had saved ALL the money I earned while growing up instead of wasting it on bullshit.”

To be honest, this mounting debt has made the very thought of wanting anything feel irresponsible. In fact, when I start thinking about what I want, I feel guilty and just dismiss those thoughts as quickly as I can. However, recently it has been heavy on my mind that I’m lacking motivation, and sinking into a deep depression. And, I can’t help but think that part of the reason is I’m not considering what I want. In other words, I’ve not had real, tangible goals to work towards. So, instead I’ve sat facing the debt that feels like it’s never ending and simply gotten sad every time I consider what I want because I just think those things won’t ever happen so why try to achieve them. It hit me like a ton of bricks though that this faulty thinking is exactly why I’m not trying to achieve anything. It’s why I haven’t been motivated to try and get rid of the debt faster. It’s why I’ve been so depressed because I feel like there is nothing to get excited over. Therefore, I think it’s time to start thinking about what I really really want. 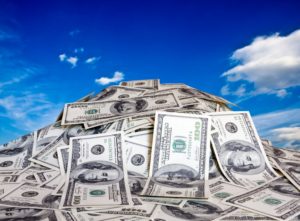 Perhaps deciding on and sharing the things I want publicly will give me the internal jolt I’ve been needing to make some serious changes in my life. Maybe by simply considering the fact that there is life after debt will motivate me to achieve something more than the mediocre existence I’ve had for so long. With that said, here are some of the initial things that came to mind when thinking about what I really really want:

Okay, these are the first things I thought of, but I want to give myself permission to think of more things I actually want. I would like to stop suppressing my desires in hopes of motivating myself to make some significant improvements in my life. And, I’m sharing these thoughts with the universe in hopes of achieving them faster. Show me the money U!!!