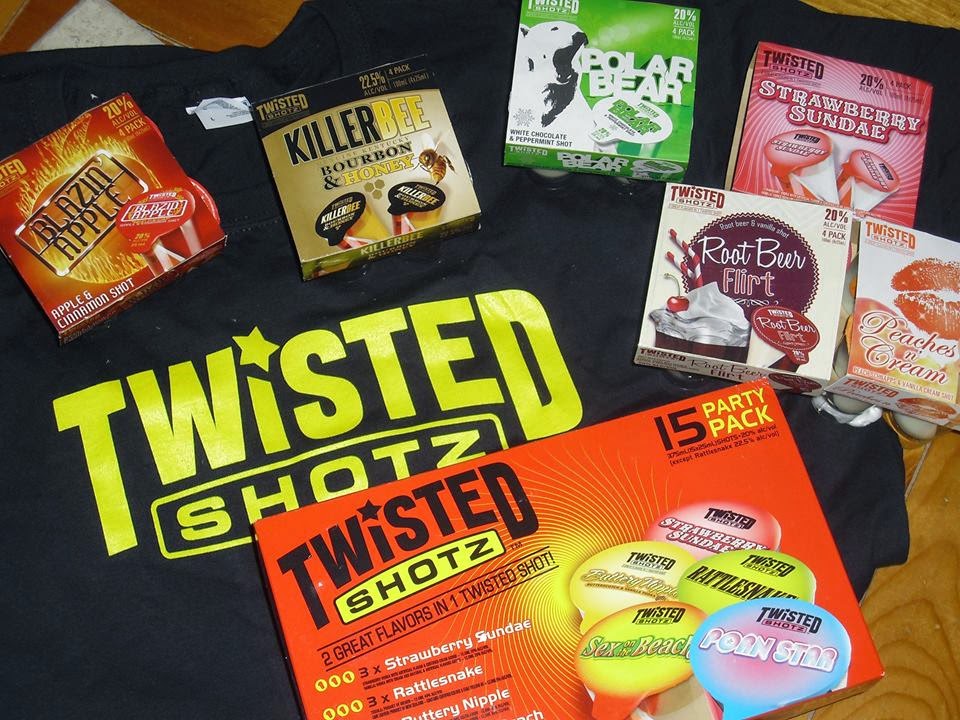 Today’s Thirsty Thursday posts is about @TwistedShotz!
Now, although the company did send me the amazing goodies you see above
for free for the purposes of review this DID NOT influence my review
and all opinions are my own!

Alright, now that all of that FCC disclosure crap is out of the way- let’s talk about the shots! So, the concept behind Twisted Shotz is brilliant! Basically each shot consists of two liquors/mixes that when “shot” combine in your mouth to form the flavor you were going for. I was first introduced to Twisted Shotz a couple of years ago at a liquor store and purchased the Buttery Nipple pack because at the time I was obsessed with that shot and hey, this Twisted Shotz pack was pre-mixed!  I quickly forgot about the company because I got over the Buttery Nipple obsession but didn’t want to spend a lot of money to try the other flavors.

I seriously love these shots ya’ll! Here are my pros and cons though:

– The drinks are pre-mixed so you don’t have to buy a bunch of liquor and attempt to follow a bunch
of recipes. The guess work is handled for you

– You don’t even need shot glasses or mixing equipment. All you do is chill em and shoot em!

–  They are delicious! Duh!

– The packs are a little on the pricier side. The smaller packs come with four shots and are about
$6-$8 at most liquor stores meaning you will pay up to $2 a shot. Still cheaper than a club, but for the truly thrifty I recommend the party packs that have 15 in them. They come out to around $15-$20 a pack so at
most you will be spending about $1.34 a shot!
– The alcohol content is not as strong as you think. A single shot is 20% alcohol and comes in at about an oz and a half of liquor. You’d have to drink quite a few of them to get messed up or even buzzed.

The party pack that Twisted Shotz sent me also included some shots I had not yet tried including the Strawberry Sundae (vanilla and strawberry vodkas with cream), the Blazin
Apple (apple and cinnamon- tasted like apple pie ya’ll!), the Killer Bee (bourbon and honey- this one burned a little LOL) and the Root Beer Flirt (tasted just like root beer with its root beer liqueur and vanilla vodka). The Polar Bear it came with I’m saving for Christmas because it has mint in it!

I can honestly say that out of all the Twisted Shotz I have had I can’t think of one I didn’t like! Even the Killer Bee that burned a little I would do again. Therefore, my overall assessment is that I WOULD recommend these drinks and I will be drinking them again!