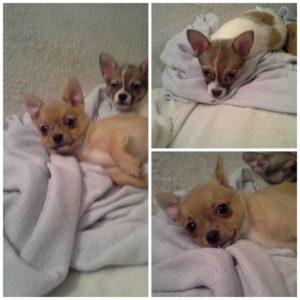 On Sunday November 8, 2015 my family of two became a family of four! My husband J and I, after years of wanting furbabies got not one, but TWO puppies. This came after visiting a friend who had adopted their havanese puppies, they were so cute and I loved seeing them. My husband and I decided right there to take the leap and start looking into getting our own furbabies, and not long after we found them! They are Chihuahua/ Pomeranian mixes, they are both boys and their names are Baileys (the tan one) and Kahlua (the white and brown one). We were initially going to just get one, but when we saw these little guys our hearts just melted. Getting two was the best thing for us too because they play together and keep each other entertained for hours while we work, do chores and do other things. 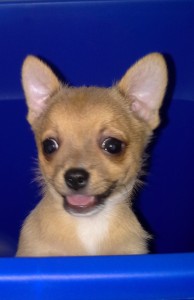 Baileys is rambunctious, exploratory, an instigator and the more troublesome of the two. LoL! And yet, when he sticks his little tongue out and smiles I just fall in love with him all over again. He initially was having the most trouble with potty training, but he is becoming the faster learner of the two. We’re training with puppy pads and each day he is having less and less misses and non-puppy pad eliminations as some puppy sites have called it. 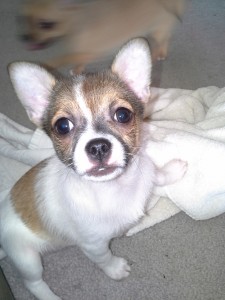 Kahlua is the more affectionate one and definitely craves attention like no dog I’ve ever met. He started out as the one that caught on to the potty training quickly, but now we’re having more trouble with him than Baileys. Getting the training done for puppies can sometimes be so hard, especially with two! Still, they both are pretty smart and are enjoying toys, playing and running a lot.

Speaking of toys… I didn’t like that toys at Petsmart cost like $10 a piece so I made the boys this: 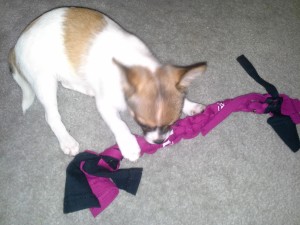 Best part? This one was FREE! I received a couple of free t-shirts at events and they didn’t fit me. So, I cut them into strips and macrame’d them together and the boys love playing tug of war with it and each other. You can grab the free instructions for how to do this simple knot here. They used string in the post, but I used strips of t-shirts to make it doggie appropriate 🙂 I’m thinking I’m going to make more of these for Christmas presents for the dog lovers in my life because I get a lot of free t-shirts from various events! Perhaps next time I’ll film how to make it and post it on this page!

I also made them ornaments with their pawprints, but they aren’t done yet. I still need to paint them! Needless to say, I’m loving my furbabies!!! I’ll post more about them as time goes on I’m sure, but for now I’ll leave you with this adorable pic I snapped of them with bandannas (they ripped them off not 30 seconds after this pic was taken): 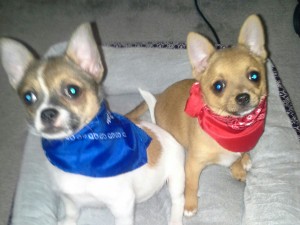 2 thoughts on “My Latest Adventure- PUPPIES!”