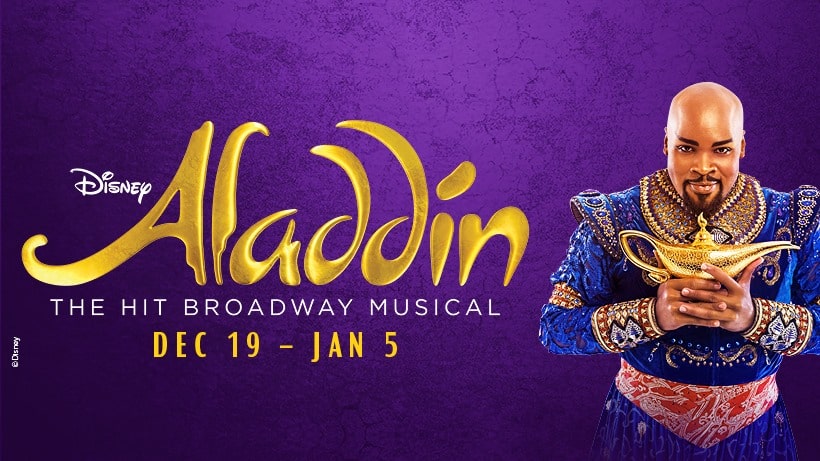 Thanks to the Straz Center, I received complimentary tickets for the purposes of review to “Aladdin The Musical”. This has not impacted my review and all opinions below are my own. This post may contain affiliate links. Thank you for your support!

I love the Disney classic movie Aladdin. I have for as long as I can remember. Who can forget the iconic Robin Williams playing the role of Genie, and stealing the show? It came out when I was 8 years old, and I remember wearing that VHS tape out watching it so many times while growing up. Remember those?!? VHS tapes. Ha, now, I feel old!

I learned all the lines, and know every song by heart. And I would annoy my mom singing the tunes at the top of my lungs. I can almost hear her saying, “Ashley, are you going to say every line out loud, or are you going to let me hear the characters say them?” I was obsessed.

Then, when they brought the cartoon to life with the hit feature starring Will Smith earlier this year, I fell in love with the story all over again as an adult. I guess you could say I’m a sucker for a rags to riches story! And, the Genie? HELLO! Will Smith did a phenomenal job in the role.

From the moment I learned about Aladdin The Musical reviews started to pop up in my social media feeds about that sang its praises. As soon as I heard it was coming to Straz Center in Tampa, I put it on my Tampa Broadway Bucket List! I just HAD to see it! So you can imagine my excitement when I was granted my wish of seeing the show right here in my own back yard. Read on to learn what I thought about the live musical version of one of my favorite stories…

Aladdin The Musical – What Straz Said About It

From the producer of The Lion King comes the timeless story of ALADDIN, a thrilling new production filled with unforgettable beauty, magic, comedy and breathtaking spectacle. It’s an extraordinary theatrical event where one lamp and three wishes make the possibilities infinite.

See why audiences and critics agree, ALADDIN is “Exactly What You Wish For!” (NBC-TV).

Aladdin The Musical – My Review – (Warning! Spoilers ahead!)

Now, in my defense, if this review really has spoilers, clearly you’ve been living under a rock because how can you NOT know the story of Aladdin?!? Then again, I guess there are some differences between the films and the play. But, I digress… Alright, now – guess what I thought of the show tonight? Yep, you’re right! I LOVED IT!

I loved it so much I rushed home to write this review to share with all of you that I think everyone should see it. It was such a wonderful date night for me! Don’t tell anyone, but I even shed a tear or two from how much I adored watching the play.

From the opening number to the very last beat, I was tapping my toes, and singing along to every song that I knew. #sorrynotsorry (I at least tried to sing them as low as possible as to not annoy the other theatergoers. I think my mom would be proud that I didn’t sing too loud this time ha!) I was excited to hear new songs, but I was incredibly grateful that all of my favorites were in the score.

The show opens with the song Arabian Nights. And, the costumes were just as exciting and colorful as I hoped they would be. We meet the Genie for the first time in the first number, and then Aladdin, and later Princess Jasmine. All of my favorite characters (less a monkey) were in the show. Though I missed Abu, I appreciated that for the most part the musical stayed true to the story I first fell in love with.

There were some obvious tweaks here in there because, well, you can’t exactly include everything from the cartoon or even the full feature film in a live stage show. But, they came darn close while still capturing the magic and amazement of both films in my opinion.

Read the full synopsis of the Aladdin here.

Can we just talk about those sets for a moment?!? They absolutely took my breath away. This was especially true for the Cave of Wonders set. WOW! WOW! WOW! The gold, the shimmer, the pyrotechnics! It was just incredible. All of the sets were wonderful, but that Cave of Wonders was the highlight I wasn’t expecting. But I was there for it!

One thing that really tickled my fancy was all the magic and humor they added to the play. It was so much fun. Aladdin disappears and then reappears in one illusion, there are wardrobe changes that happen in the blink of an eye, and flowers appear out of what felt like thin air. It was just non-stop entertainment that dazzled and delighted me in a way I can’t even explain.

And, of course, the Genie steals the show in this production too! They could not have picked a better actor to portray him! He was soooooo good. And I laughed my face off.

Seriously, this show is great for the whole family and I highly recommend it! It’s perfect that it’s here during the holidays because it truly felt like Christmas as I watched this fun play tonight. I would definitely watch it again, and I sincerely hope I get to someday once more very soon!

Aladdin is playing at The Straz Center now through January 5, 2020. To see all the shows playing at the Straz, click HERE!