Anyone who knows me knows I’m a die hard The Girls Next Door
fan. Ever since the first episode I watched featuring Bridget Marquardt, Holly Madison and Kendra Wilkinson I was hooked! Who wouldn’t want a
life of luxury and fantasy that these women got to live?!? I personally
wouldn’t want to be a girlfriend of Hugh Hefner, but I would love the
perks they got from living at the mansion!!!

While watching The Girls Next Door
I learned a lot believe it or not. My favorite girlfriend was and always will be Bridget Marquardt. Why? Well, she was a mass
communications major, I too was a mass communications major. She loves
Halloween, I love Halloween. She loves to dress up and I do too when I
have the money to do so. She likes to party plan and I do as well…the
list goes on and on of things I have in common with this awesome chick.
Of the many lessons I learned watching the show, here are five that
REALLY stuck with me:

1. Never give up on your dreams!
Bridget tested to be in
Playboy and didn’t get chosen so she went back
to school. However, she didn’t give up on her dream of being in
Playboy.
When the opportunity to move into the mansion came up she jumped at the
chance. Not expecting anything from it, she just set out to have fun.
Low and behold though moving in led to the chance to be in the magazine
and she was stunning in every pictorial she was a part of.
2. Age ain’t nothing but a number!
Even over the age of 30 Bridget still had a rockin’ body and got in
Playboy magazine. Now, I don’t desire to be in Playboy, but as a gal
that is not exactly getting any younger this inspires me! You can be
sexy over 30!
3. Be genuine! In the first
episode Bridget talks about how she was there at the mansion to have fun
and not to see what she could out of it. She was always genuine and the
girls that were fake were weeded out of the mansion. People can tell
when you are just being friendly to use people. Be genuine with people
and your relationships will be deeper and more fulfilling.
4. You CAN eat and look good!
The episode where Bridget prepares for her strip tease and the episode
where she prepares to do a workout video both spoke to me. I’ve
struggled with my weight since high school and it was nice to see
someone who loves food as much as I do could workout in a fashion that
burned off pizza, cake and whatever else she wanted to eat!

This is a twitter exchange I had with Bridget in January about her workout routine nowadays: 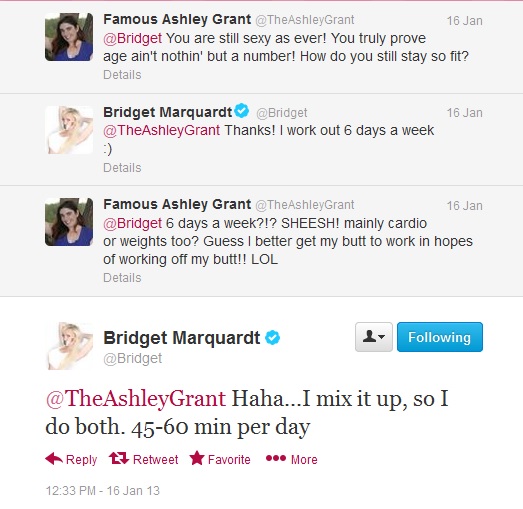 5. Once a Dream Comes True, Dream Bigger! You can keep dreaming even after your dreams come true. The end goal of being in Playboy led Bridget to dreaming of being a radio host, hosting a travel show and so much more. I hope that all of my dreams come true and once they do I plan to make new lists of new dreams and go after them too.

Are you a fan of  The Girls Next Door? What are your favorite episodes?!?
Want to get the series on DVD? Click the HERE to get all of the episodes.

Source for the image above.

1 thought on “5 Things I Learned from Bridget Marquardt”